To make an appointment call:

You are here:
Feel Good Stories 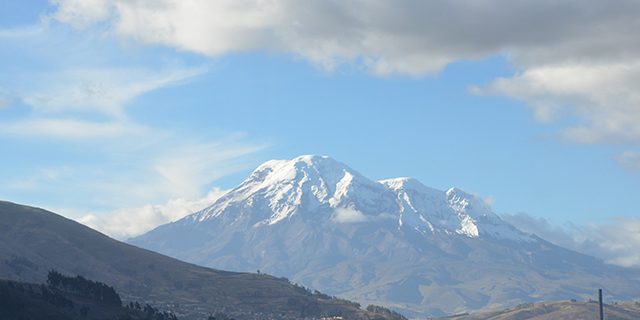 When asked by an old friend (Mike Sable, MD) with whom I trained some 25 years ago, whether I would be interested in joining him on a cataract mission to Ecuador, I jumped at the opportunity.  This was something that I’ve often thought about doing. But the rigors and routines of life, raising a family and building a practice, seemed to get in the way.  Now, as an empty-nester, there really was no reason to say no.  I jumped at the opportunity to connect with an old friend, do a good deed and learn a few things along the way.  The thought of giving sight back to those much less fortunate than us was awesome.  It was a wonderful experience and one I will participate in again.

Riobamba is a city located 120 miles south of Quito, the capital city of Ecuador.  It’s a mountainous region, where the focus is agricultural.  The indigenous people of the area work the land, live off the land and sell their handicrafts.  They have a strong sense of family and community.  These people are the “salt of the earth”.  The physical beauty of the area is breathtaking.  The 5 snow-capped volcanoes surrounding Riobamba, the largest of which is Chimborazo, reach 20,000+ feet into the sky and loom large over this town.  It is beautiful, as are the people of this mountain community.

The mission group was a mix of doctors, nurses, surgical techs and other ancillary staff all coming together for one unified purpose – to restore sight to needy people.  Many have been blind from cataracts for years.  Some had only one functional eye, the other blind from previous trauma or disease, never to regain any useful vision.  Blinding cataracts have hindered their ability to do the things that we take for granted in the U.S.A., like the ability to care for our children, work and provide for families.

FIBUSPAM, the rural health clinic and the host organization of our mission, was the brain child of David Guacho.  David is a passionate man, determined to make a difference in his community.  His passion stems from the unfortunate death of his infant son due to a significant backlog at his rural public hospital, due to under-staffing and negligence.  He vowed to bring change and equality to his people and community by dedicating his life to bringing better healthcare services to the region. David built up a clinic with its own staff of doctors and nurses.  However, the needs of many of the patients is so great, that the clinic must rely on many outside resources, physicians from other parts of the country and the world, and missions such as ours to handle some of their most complex health issues.   Cataract surgery costs $3000 per eye in Ecuador, but with an average monthly income of $350, the surgery is out of reach for many.  These missions are the only chance these people have for any hope of a better, more normal life.  This is where our mission came in and the real work began. 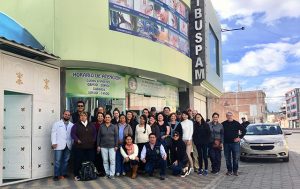 Most of our group was from the Long Island, New York area where I grew up.  I was the only person from Michigan.  I met up with the group in Fort Lauderdale, where we all boarded the next plane to Ecuador.  All of the other participants traveled with an additional suitcase, which carried our donated supplies for the week.  Landing in Ecuador, we were all ready for a good night sleep before our journey to Riobamba the next morning.  It was a 4-hour bus ride to Riobamba, which we spent getting to know each other better.  After all, this will be my “family” for the next week! 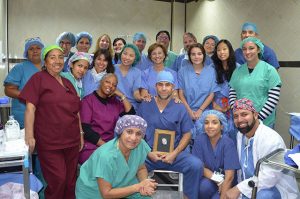 My new family for the week

Arriving in Riobamba, we were introduced to the local staff and a toured the facilities.  We began to unpack our supplies and set up for the week.  Equipment was checked, instruments were sterilized, and we familiarized ourselves with OR’s that would be our home for the next 5 days.  We were prepared for an exciting week ahead.

Hearing the news of our mission, patients traveled far and wide, some over 14 hours by bus through small mountain towns for a chance at sight-saving surgery.  The first patient we met that first Sunday evening was a gentleman names Andrés. Andrés was completely blind in his left eye from either complications of rheumatoid arthritis or a severe corneal ulcer, never to regain any useful vision.  His right eye was nearly blind from a dense cataract.  We examined Andrés and determined that he should do well with cataract surgery, giving him a chance at a meaningful, more normal life.  Andrés was scheduled for surgery and he and his family could not have been more excited.

As we awoke on Monday, the excitement of the next 5 days became reality.  We were hoping to complete approximately 20 surgeries each day.  This would be an easy goal to achieve for 3 surgeons in the United States with the efficiencies of the modern day operating room.  However, in Ecuador they do not have these efficiencies in place, and the equipment was antiquated by our standards.  Add to that the dense cataracts, the likes of which we seldom see in the US, these next 5 days would be challenging.  But we were ready!  We were determined!  We had a mission to restore sight to some of the neediest people.

When we entered the clinic, we were greeted by more than 50 patients and their families, all hoping for a chance at sight.  We began screening and examining these patients, and scheduled surgeries for those who qualified.  The surgical team got started right away, working through the inefficiencies, finding a rhythm and managing to complete a total of 19 surgeries in a 12+ hour day.  We would leave the clinic that first day with a great sense of accomplishment.  Exhausted but happy, we ventured out for some much-needed dinner and a little local entertainment.  A good night sleep came easy, and then we all woke early, ready for the next day.

Each morning we would see our post-op patients and then head to the operating room again. Four more days of grueling 12-hour days, followed by some dinner, entertainment and a few hours of sleep.  Difficult as these days would be, they were incredibly rewarding.  The appreciation we received from the patients and the smiles from the families was heartwarming.  I was proud of the accomplishments we achieved and humbled by the simple way of life and the sheer gratitude of these indigenous people.  They could not be happier.  This is why I became a doctor.

There were a few noteworthy cases I’d like to share with you.  These patients are extremely interesting, as these are situations that we so rarely see. 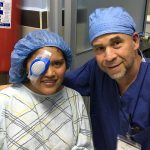 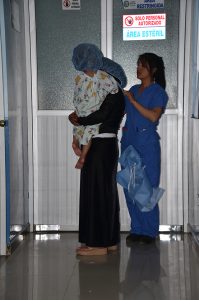 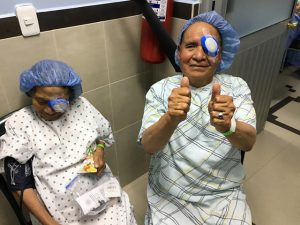 After surgery, all patients were seen the next day to confirm that their post-operative condition was as expected.  Through the local clinic staff, we were able to get these patients scheduled for regular follow up to ensure the healing process is going well.  The patients could not have been more grateful for the vision that has been restored, and the joys of life that lie ahead.

While our mission in Ecuador was considered a Cataract Mission, as a team we did so much more.  Sure, we did 85 cataract surgeries that changed lives forever.  But the team was not just surgeons and surgical staff.  Everyone had a different responsibility, but we all had one common purpose, to restore vision by one way or another, to the indigenous people of this wide-reaching mountain community.  All in all, our team performed 85 cataract surgeries, 600 ophthalmic exams, and distributed nearly 1000 pairs of glasses to the local community.  I would call that a big success.

These stories will remain with me and the rest of our Ecuadorian team for a lifetime!  We helped some wonderful people – warm, loving and uncomplicated.  They are a true community.  There is much to be learned about hope, love and perseverance from the people of these surrounding mountain towns.  This experience makes us all remember why we chose this profession.  It wasn’t for the recognition.  It wasn’t for the money.  It wasn’t for the lifestyles that we see in the movies.  It was for this! 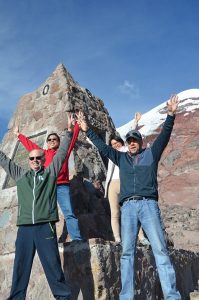 The feeling of a successful week!

This is why I became a doctor…  To bring joy and a meaningful life back to those in need.

It was rewarding.  It was refreshing.  It brought us all a little humility. And it made us all realize what a truly wonderful life we all have back in the States!  We may not be able to change the world, but we can make it better one patient at a time.